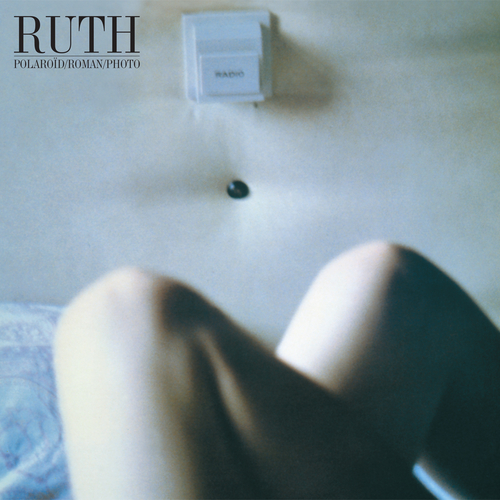 Following on from the long since sold out 2010 release of Ruth’s cult 1985 album 'Polaroïd/Roman/Photo’ we are very pleased to announce the release of a 30th Anniversary Deluxe Special Edition reissue.
The first 50 copies are extra special as the booklet insert is signed by Thierry Müller.

This deluxe edition is limited to 500 hand numbered copies and is pressed on transparent clear vinyl. The record comes in a gatefold sleeve and features a 12 page booklet of lyrics and photos and download codes for a digital version of the album which includes six bonus tracks.

Ruth's 'Polaroïd/Roman/Photo' was featured on Angular’s 'Coldwaves and Minimal Electronics Vol.1 comp, which received glowing reviews across the board; e.g. Pitchfork – 8.2, NME – 8/10, Vice – 9/10. This wasn't the case the first time around though. Originally released on Paris Records in 1985 Ruth's LP sold just 50 copies and was relegated to obscurity until the track "Polaroïd/Roman/Photo" started appearing on bootlegs and compilations in the early 00's, slowly becoming the cult synth pop classic it is nowadays. An original copy goes for upwards of £300 on ebay and Ruth are a shining light from an oft forgotten music scene that is becoming increasingly influential today.

Ruth was the brainchild of Thierry Müller, a photographer and graphic artist from Paris who drew his inspiration from bands and artists like Brian Eno, Stockhausen, Pere Ubu, Neu, Velvet Underground and Kraftwerk. In the late 70s he began to work on Ruth, releasing the lone album Polaroïd/Roman/Photo in 1985. The line up of Ruth was collaborative and fluid, brass mingles with prototype drum machines, and squalling experimentation sits alongside sultry French girls across 40 minutes of edgy pop innovation that sounds remarkably undated alongside contemporary pop music.

From the jittery "Thriller" with its telephone sound samples and an ever ascending synth, to the lanquid "Mabelle", the cover of Can's "She Brings The Rain", and the sexy soiree of playful vocals and alluring brass that is "Polaroïd/Roman/Photo", this is an album that is now ready to be represented for the attention is deserves.