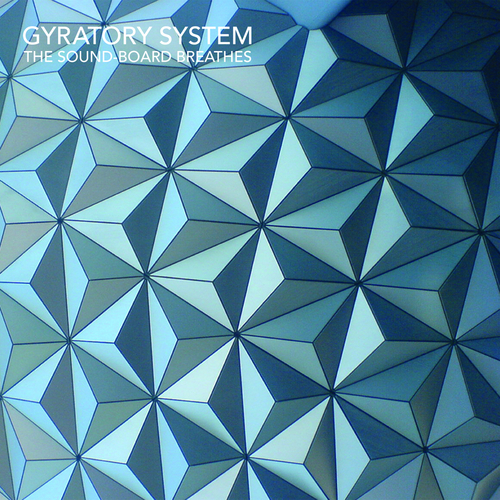 Welcome to the world of Dr. Andrew Blick, the effects trumpet player, producer and driving force behind Gyratory System. First you must prepare yourself for something unlike anything you've heard before, for what Blick has created is utterly unique, in places genius and in other parts quite surreal. An album that takes it's inspiration from a museum in Brentford exhibiting mechanical instruments from the 19th century, piano rolls and wind-up one man bands, 'that's the kind of sound I'd like to think we're aiming forî Blick describes proudly. As we said, prepare yourself for something rather different.

Dr Andrew Blick, by all accounts is something of a legend. John Peel famously joked that he was going to have him barred from the BBC's Maida Vale studios as he'd featured on so many sessions. The reason for this? The rare art of playing the trumpet through effects. Indeed 70s, On The Corner-era Miles Davis, fourth world pioneer and Brian Eno co-conspirator Jon Hassell and Andy Diagram, lately known for his work with Pere Ubu's David Thomas, are among Blick's only co-practioners. An almost scientific way of approaching music and sound, Blick pursued the Gyratory System project as he developed a recording and production technique he dubs 'The Process'.

Using a different formula for each track, 'The Process' is a complicated thing to describe (it is a rare art after all) but as Blick explains 'It might be taken from serialist classical composers who take ideas from a formula, or minimalist composers like Steve Reich where they have set patterns for notes. There's also composers called the Spectralists, who actually analyse different frequencies that they can combine together to create individual sounds.

"We combine all that to create a backing track, and that's the pre-determined element to it," Blick continues. In the studio, Gyratory System collaborators (including Blick's father Robin on a range of woodwind instruments) then begin to improvise over this fixed core. "The idea is that we combine these structural elements with random, freer elements. Having created this backing track, we get people to play on top of it, but it has to come from improvising rather than a set arc."

Got all that? Well if not you needn't worry; the music will definitely catch your attention. Already hailed on tastemaker blogs and the likes of Vice and NME, Gyratory System, with all its science and formula, actually sounds more like a marching band on acid and maybe more surprisingly finds itself very comfortable on the dancefloor. You'd file it alongside the likes of 23 Skidoo and A Certain Ratio and the more contemporary twists of Caribou, Holy Fuck, Four Tet and Animal Collective 'mainly for what they do with live instruments where you can't tell what the instruments areî says Blick. Clearly he knows exactly what he's created, but managing to combine being contemporary, avant-garde and dancefloor friendly is an impressive feat by anyone's standards and it's hard not to fall for Gyratory System.

Across 'The Sound Board Breathes', a line inspired by Milton's 'Paradise Lost' (a book that focuses on the tension between free will and pre-determination ñ a conflict that Blick also feels in his music), you will find 11 unreservedly bizarre tracks that tell a story through sound. A concept album that deserves your full focus and open-mindedness and one that could very easily become your album of the year, for we promise you something incomparable and exciting and in the sea of mundane albums that are released every week, what more could you possibly want than that?

"If insects suddenly rose up and took over the world this would be their battle anthem amplified by a zillion antenni.It's bizarre cartoon logic is it's diverse plundering of the Ethnicity of sound like a despot in a dustbin.Moondogs gas jet grenadiers meets Dr phibes clockwork band in Genghis Kahns funkfair. The best music is heard in dreams, unattainable on waking except here it is! True Outsider music for that mad dancing child in us all." iD Magazine